An Intimate Beach Destination Wedding With A Bride In Red

Sonam & Rohan got married in a beautifully intimate wedding in Hawaii! It was breathtakingly picturesque, when the two of them had their pheras while the ocean played in the background and the setting sun provided the perfect lighting! Sonam looked gorgeous in a red lehenga while Rohan looked immaculate in a sharp suit. For the at-home mehendi, Sonam kept it really simple and casual with a pretty dress and minimal mehendi! This Hawaii wedding is totally what intimate destination weddings could look like! We met two years ago, at a party and we ended up chatting for 3 hours that night. It was a chance meeting, and I was surprised that even though we were in the same city (Delhi), we had never met! But, as they say, when you know you know, and when the right person walks in your life, it is truly magical and it was exactly like that for us! 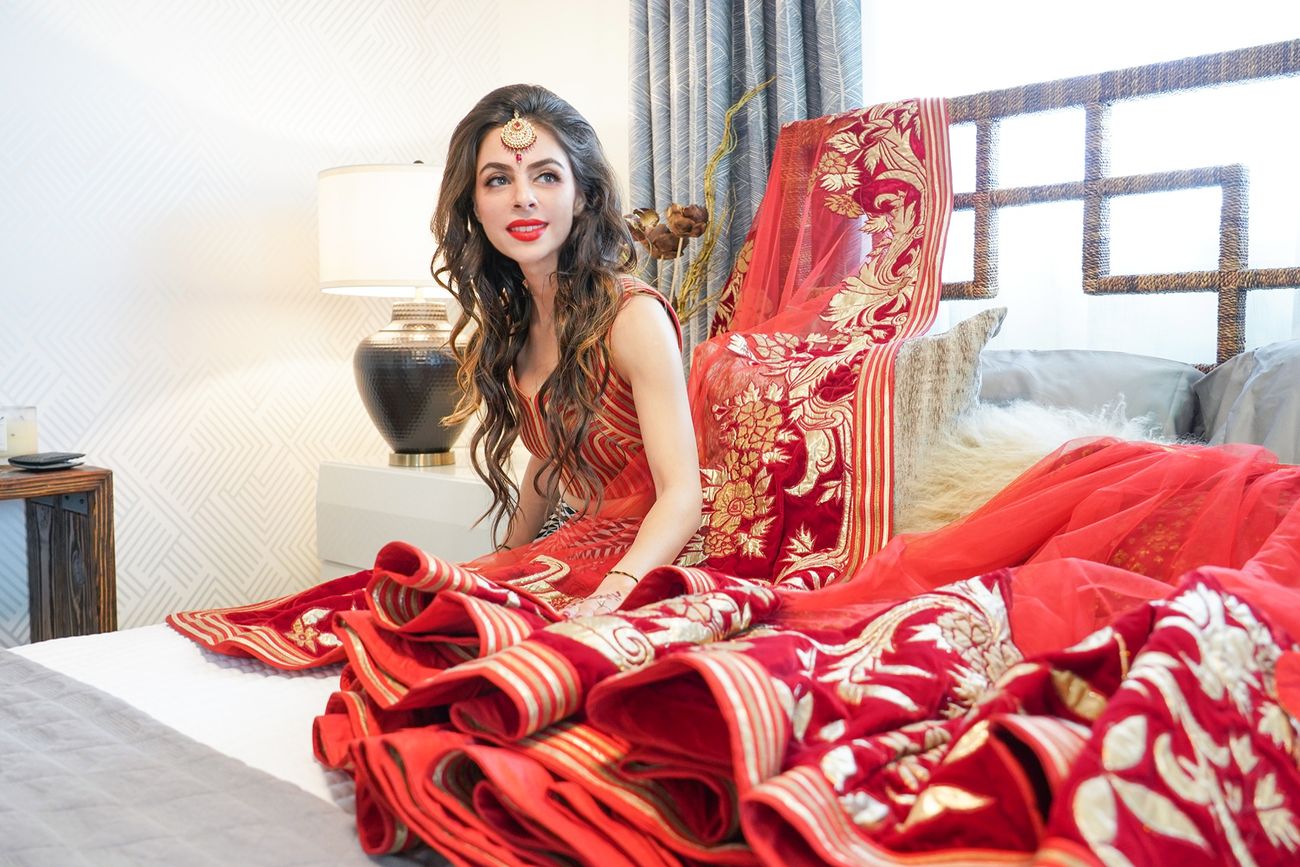 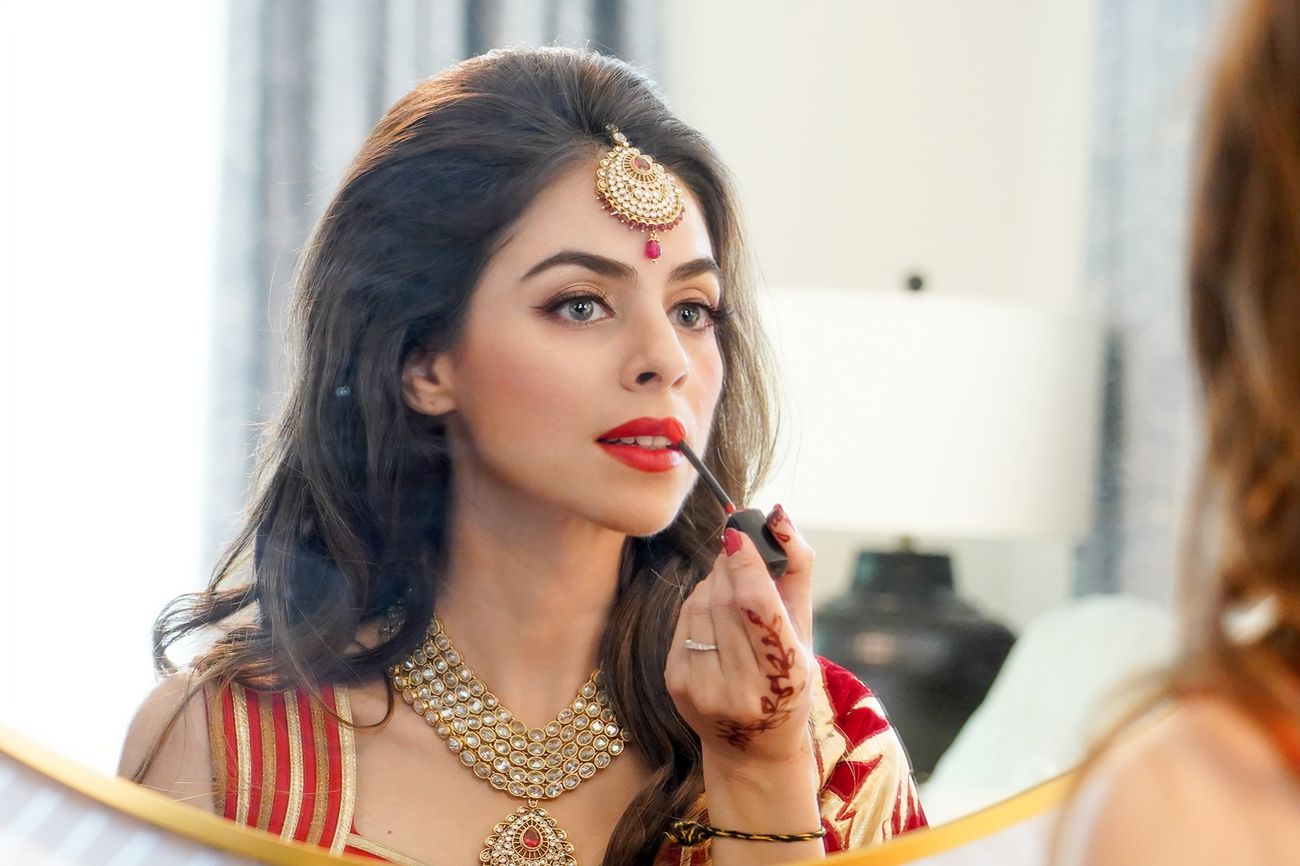 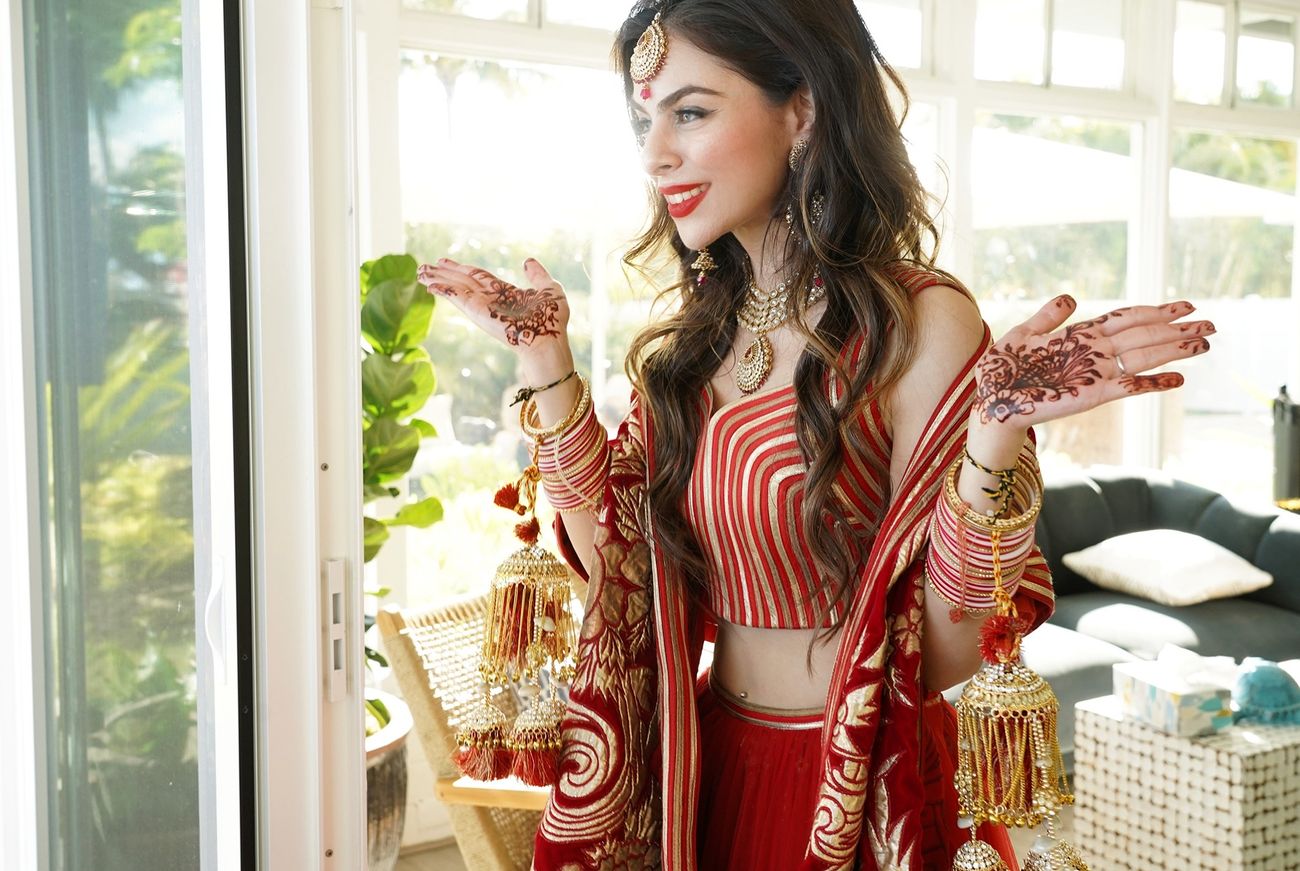 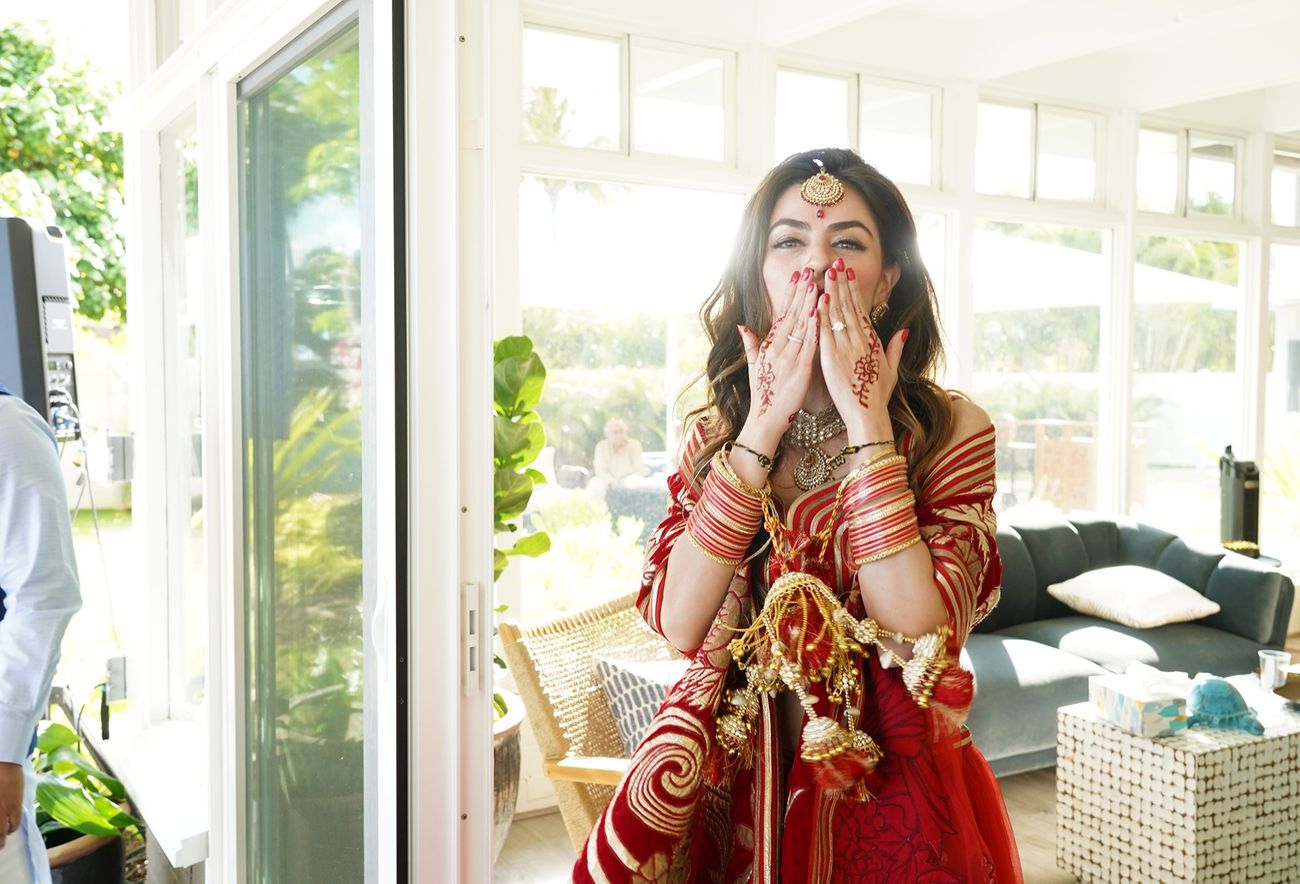 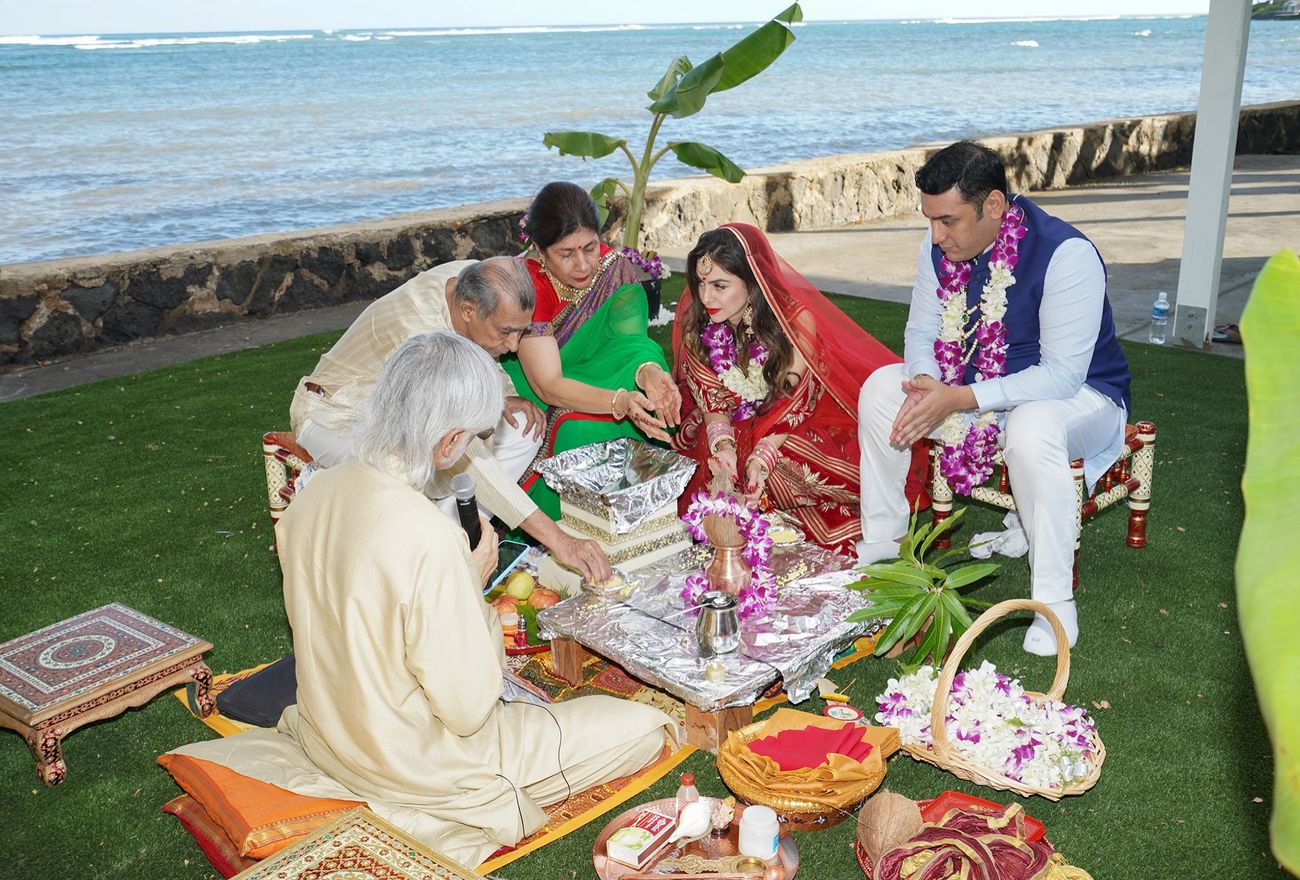 We had a city hall wedding in New York in Feb, and then we travelled to Hawaii for a small vacation as Rohan's family lived there! However, with the onset of coronavirus and the worsening situation in NY, we decided to stick around in Hawaii and not head back. We were supposed to go back to Delhi and have a proper Hindu Wedding, but then we thought to do it in Hawaii (as our families were also there only!) and we couldn't have asked for a better or more beautiful location. We saw the sunset as we took our pheras and it was just breathtaking!

We had a small mehendi at a lovely cottage where we are staying here in Oahu. And then the next day we had our wedding. We had a chura ceremony, baraat and my bridal entry (with his uncle and aunt as they were being my parents since my actual parents couldn't come to Hawaii). We then had the pheras, following by vidaai and greh pravesh. So, we followed every custom and did all the ceremonies that are there in a Hindu wedding and enjoyed ourselves thoroughly. Everything was like how it would have been, except the people I guess! Most of our guests attended virtually, but at the place, we had everything - the decor, the flowers, the music. All of it!

I wore Siddharth Tytler lehenga and I had picked it up a while ago and fortunately it was couriered to me from NY and I wore it. It is a beautiful red lehenga and I loved it.

From the guy who was doing flowers to every vendor involved, the entire team was absolutely heartwarming. They went out of their way to make us comfortable and did the best job. Because of them, our entire function had a vibe of calm and relaxation. Kudos to the team and I guess, the Hawaiin culture for being so welcoming and warm.