Terrible experience!! To say that our wedding day was ruined would be an understatement. And on top of it , inspite of complete dereliction of our event, food delays and pathetic customer service, Windsor gave no regard to compensate for the humiliation and loss we incurred. To start with, Initially we asked for Ettukettu as our venue in (March-April 2018) and came to see it in May 2018 and after visiting the venue, we decided to go for it. A few days after the visit we gave an advance of 10k and booked a room. But almost the next day as soon as the deposit was received, we got a call from Jeny Mathew from banquets saying ettukettu isn’t available anymore as it is to be made an ayurvedic resort. When all the talks and discussions were going on and when we visited or when we have the advance nothing about it was even mentioned We were sent a video of castle island and suggested that we go for it. We reluctantly agreed. Later in September 2018 when we went to see Castle Island, we were concerned by the state of it, completely unmaintained. The parking lot in front of the bridge was filled with garbage bags. Even during that visit when we asked if ettukettu would be available, they told us that the talks for the resort was still going on, which was a blatant lie and at which point they had already taken bookings and we only came to know about it after coming to UK. This was again accidentally dropped by Ronnie who was the sales person who showed us the place in September and outright lied to us. When confronted about this he told hat its just how business is. This itself is a clear demonstration of your negligence of putting client interests first. After all this, we were considering changing venue altogether with hardly 3 months to go and that when the GM Rajesh came in to the picture and assured us he’ll directly handle everything, make sure road on the side of the convention centre would be open, letting vehicles pass through enabling the bride and groom and the elderly to arrive just outside the bridge to Castle Island, personally make sure the road will be managed by security and by not allowing any other vehicles to be parked there, toilets would be arranged in the castle island and not outside etc . But none of which were fulfilled. To list out the things that windsor said will do and didnt do: 1. Side road to castle island was closed so people could not be dropped at the bridge including the bride and groom who had to get off amidst the traffic and walk in through the hotel reception and two other wedding receptions 2. The security guys had no clue that there was a venue called castle island so people was sent to convention centre. 3.Food was late to arrive by 1hr and a half which is completely unacceptable on all accounts. Half the people left without food. 4. The food set up was disorganised and not all dishes were on all counters. The food served was not according to our menu. Items like noodles were not in the menu! Paneer butter masala, kozhikodan neychoru and Gobi Manchurian was missing.The food wasn’t from your kitchen which was what we agreed on. Mr Rajesh himself recommended we dont mix indian and chinese foods together in the menu and thats what we got! The food arrived in different order. Main course first, soups next and Starters arrived last! 5. There were no place cards with the names of items. People had no clue what they were eating. 6. The catering staff delayed serving the food even after the delayed delivery of food. 7. The bows and table toppers given by the decorators where not put on. 8. A panthal/tent was put on in our venue last minute which caused a lot of chaos 9. Wash basins weren’t set up 10. Toilet locations were changed last minute and was not set up completely until 1 hr into the function. ( given the fact that this is your venue and you committed to arranging toilets at the castle island itself, and the fact that you realised the toilets couldn’t be brought in shows how little thought and attention/ priority you’ve given to our event. 11. The bride and groom had a humiliating experience of driving through convention center back in the middle of the crowd straight back into traffic with no one to manage the traffic and security staff not allowing us to get out of the car. In the end we had to go through reception , having broken into tears and had to go out through the back entrance of windsor castle. By not honouring the above said and previously agreed and guaranteed provisions during the function on 30/12/19, they have committed gross injustice to us personally and our families and our esteemed guests both from home and abroad. To say that they have caused us, our families and our guests, severe dissatisfaction, inconvenience,mental agony and loss of social reputation snd Despite all the discussions and negotiations were on for settling the matter amicably was going on the management was completely uncooperative and arrogant and threatened that they’ll go to court to get money which was totally unwarranted.

Waw one of a best property with lavish area. We went for a day outing program at windsor and resort We stayed in resort and the rooms and amenities are awesome thr hotel staff arraned all well and they help us to contact the programmes and help to childers to catch the fish and they cooked the same fish for them really this is a very good experience for us Regarding the food was cooked in authentic style and the chef explain on all detailed that was also a very good experience and we never seen such a valid treatment form a banquet anyway we will recommend this property to all of our group and others All the best the windsor team

One of the best wedding venues at Kerala. I would like to thank you again for all of your help from the day we enquired about booking my sister's wedding.It would not have been possible without you all. Beautiful surroundings, comfortable rooms, peace, quiet and tranquility. The staff were very friendly. Food was very delicious with a great choice.

Thank you very much 😊 it was great memories.my sister wedding function was superb and we always recommend your hotel specially gm Rajesh Nair he give us great support 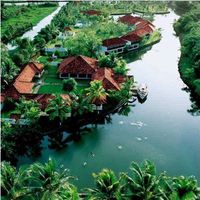 I has visited this vendor about a function. the place was not well maintained. though all the image shows water is blue . it Is all computer work. the area ha stagnant water with mosquito larva. the lawn is poorly maintained. the nalukettu also is very hot. the person who accompanied us and showed us around was acting over enthusiastic in getting the payment done. he neither understood our requirements also enquires to people who have conducted function here. like they reduce the cost at poor food . and later they bargain about money. so pls. not a good choice . can even read review below from person who has conducted wedding here

One of the best venues i have come across till date, its a Perfect one and I will definitely choose this. Would like to suggest it to my friends too.

<p>Did not appreciate their dealings much, would have expected better from a resort like theirs.&nbsp;</p> Source